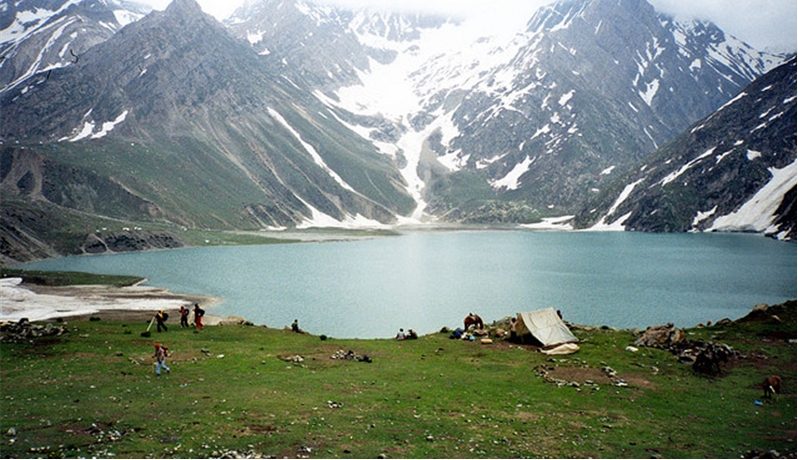 Amarnath cave is a famous shrine in Hinduism located in the Indian state of Jammu and Kashmir. It is dedicated to Lord Shiva. The cave is situated at an altitude of 3,888 m (12,756 ft),[1] about 141 km (88 mi) from Srinagar, the capital of Jammu and Kashmir and reached through Pahalgam town.
The shrine forms an important part of Hinduism, and is considered to be one of the holiest shrines in Hinduism. The cave is surrounded by snowy mountains. The cave itself is covered with snow most time of the year except for a short period of time in summer when it is open for pilgrims.
An annual pilgrimage is made to the Amarnath cave by lakhs (hundreds of thousands) of Hindu devotees on challenging mountainous terrain to see an ice stalagmite formed inside the cave.
Inside the 40 m (130 ft) high Amarnath cave, Lord Shiva gets formed due to freezing of water drops that fall from the roof of the cave on to the floor and grows up vertically from the cave floor. It is considered to be a Shiva Linga by devout Hindus. He waxes during May to August, as snow melts in the Himalayas above the cave and the resultant water seeps into the rocks that form the cave and gradually wanes thereafter.
As per the religious beliefs, it has been claimed that the lingam grows and shrinks with the phases of the moon reaching its height during the summer festival, although there is no scientific evidence for this belief.
According to a Hindu legend, this is the cave where Shiva explained the secret of life and eternity to his divine consort, Parvati.Two other ice formations represent Parvati and Shiva's son, Ganesha.

The main purpose of the annual pilgrimage to the cave is to see the ice stalagmite Lingam.